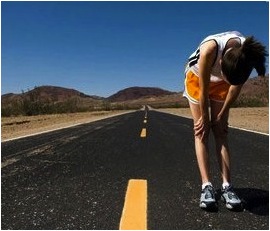 Where The HELL Are You Running To?

Running is still considered to be an important aspect of physical fitness – but is it REALLY that important? Is running necessary for your health? Could we be running mile after mile with little result? Let’s discuss why running is used in fitness and determine for whom it’s effective.

Running has had its history with humans. Back when we hunted for food during the hunter-gatherers time period, we used our speed and ability to move to avoid danger. Running was also used to catch our prey, as our endurance levels were superior compared to most other species.

Both scenarios were engaged using the hormonal response called “Fight or Flight”, which is where the body uses all of its systems to react at its highest potential for successful action (Fighting or Fleeing). This alarmingly powerful hormone is used to push the body to a maximal level for survival.  In this period of time, the action of running became a reaction from the Fight or Flight response.

Running wasn’t an option in this period of time.

Today, running is used for fitness instead of for survival. Athletes use running to prepare themselves for their sport(s). The military uses running to train their soldiers for combat and battle. Running enthusiasts compete against each other using distance and speed. These and others alike train themselves to run because they have to. My argument is this: If you don’t HAVE TO run, then why do it?

Sure, running has many benefits such as cardiovascular, muscular, psychological, and emotional. Running can be used as a way to challenge a person’s willpower. Running helps release endorphins, which reacts with the brains opiate receptors (which creates the chemical reaction behind the term “Runner’s High”).  Even if a person doesn’t see results or physical improvement from running, the emotional reactions they experience from running can help justify the movement. So what’s the problem? Well, I’ll use the expression of “Risk-to-Benefit” ratio to explain why I do not agree with exercisers who runs for their health and fitness. In regards to running, the risks are almost always greater than the benefits. Knee pain, ligament tears, muscle pulls, ankle strains, ankle sprains, shin splints, hip bursitis, patella degeneration, stress fractures, and IT Band Syndrome are just some of the common injuries seen from running. Running places a great demands the joints of the lower body. The impact from the foot striking the ground is absorbed in each of the lower body joints, from ankle to hip. The continuous repetition of this impact can cause pain in numerous areas of the body. Many of these injuries are not evident until months or years after running for recreation.

Furthermore, any deviation from the perfect form of running can significantly increase the risk of injury for a runner. Have you ever noticed the different styles of running that varies between people? Every time I visit Central Park in New York City, I look around for a runner using proper mechanical form – it is a rare thing to find. More often than not, many people run for exercise without being taught the techniques of the movement. Moving aimlessly with effort and proper form is a recipe for disaster and dramatically increases the risks of running.

His technique is perfect. Does your’s look like this?

If running is still necessary albeit its history and risks for injury, an exerciser should consider what types of running are most effective. As I discussed in the Move With A Purpose article, the reason any exercise is effective is the resistance placed on the body. The body adapts to resistance (gets stronger) and then we must increase the resistance (weight, reps, time, intensity, etc.) in order to continue increasing strength. When running, distance runs require energy from the body’s endurance energy system. Endurance training incorporates typically longer bouts of exercise/movement and lowers the amount of intensity one can exert. It is physically impossible to run at an intense, exhausting pace for a long period of time. Therefore, distance runs can only be performed at a low-to-moderate intensity and will not provide ideal stimulation/resistance required to force the body into adaptation.

He should not be your fitness idol.

Because our energy is limited, a smart exerciser will spend the majority of their energy on the most stimulating movements. Movements that cause the most effect on the body will lead to the greatest improvements/results. Because everyone’s fitness levels vary, choosing an effective cardiovascular training is particular to the exerciser. There is a vast of variables that determines which types of running will be safe and effective for each exerciser (age, exercise history, past injures, body type, genetics, goals, nutrition, etc.).

Anyone who is injured or within physical rehab, new to exercising, elderly, overweight/obese, or with any cardiovascular issues.

Exercisers that are injury-free and workout regularly based on distance or time, such as distance runners, cycling enthusiasts, class goers.

*Any sport that brings the body to its working full capacity.

As an exerciser becomes accustomed to intensity, an increase must be introduced to see progress. Increasing intensity will shorten the distance and time needed to progress. An increase in intensity will cost more energy at a higher rate, and will be used up in a shorter period of time. Simply put — the more fit a person is, the LESS distance is needed to exercise.

Hopefully this changes the perspective on associating endurance training with an increase in fitness level. We must understand that running too far and too often can be detrimental to your body and lacks in effectiveness. Moving without a purpose is a passive and ineffective way to exercise. Use your body to train to a maximum, and ensure you are doing it the best form possible.